“We are only as strong as we are united, as weak as we are divided.” J.K. Rowling 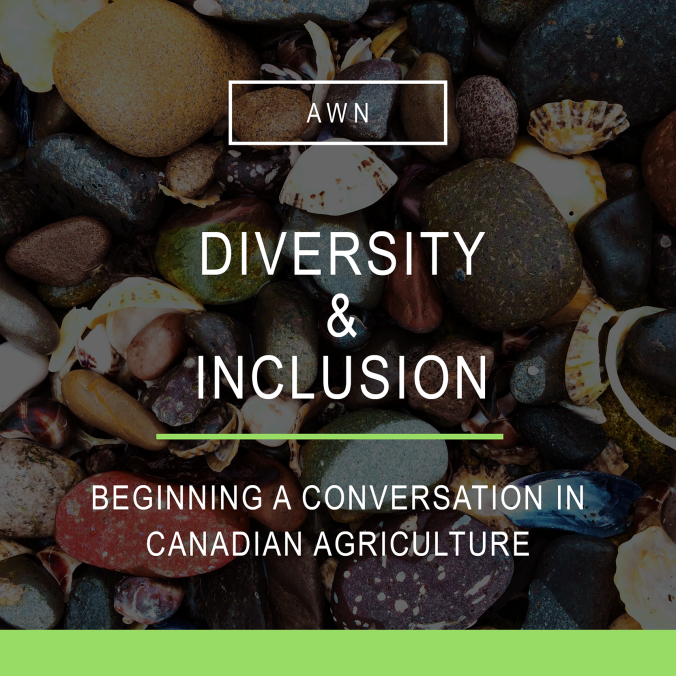 Diversity and inclusion. When I offered to organize a week on this topic, I knew that the words carried so much weight, so much responsibility, that the rest of the words to accompany them would not come easily.

Every time I thought about writing posts for this week, the first thing that came to mind was how unqualified I felt for the topic. In our society, I know I am privileged: a white, Anglo-Saxon, protestant… you know the acronym. I’ve benefitted in a society organized by people with those same attributes. But, of course, this week isn’t about me. It’s about all the great voices who have stepped up to share their stories, their struggles, and their ideas. And of course, it’s about the voices we don’t hear in our industry.

The Ag Women’s Network is quite clearly hard at work trying to encourage inclusion of women in the barn and the boardroom. This week, let’s explore diversity both with and beyond gender. We’ll talk about diversity and inclusion in all kinds of capacities.

So let’s begin at the beginning. What does diversity mean?

Diversity: “the condition of having or being composed of differing elements:  the inclusion of different types of people (as people of different races or cultures) in a group or organization”. (Merriam Webster)

This is a difference in religion, race, appearance, citizenship, sexual orientation and identity, age, gender, mental health, and residence, to name only a few.

Include: “to take in or comprise as a part of a whole or group.” (Merriam Webster)

I don’t think we need to dance around the fact that our industry is not very diverse. How we got here isn’t a tough question. We can look at colonization, immigration, law and other factors of world history to explain how Canadian agriculture ended up in its current composition. Technology has also played a role. At a certain point machinery and breeding advances meant farming was sending people out of the industry to work elsewhere and taking in only a few. Traditions also create barriers for those on the outside.

We’re at a new point in history: our industry is growing and the advances and opportunities mean we need more people in the industry. It’s a time when the industry needs to better understand our customers, so we must get to know them, what they value, and how they speak, socialize, perceive, and, most vitally, eat. We need to build positive relationships with all people in a time when the world is filled with division. It’s more than time to bring in new ideas. It’s time to heal where the exclusion has hurt, even when it was unintentional. It’s time to create an industry that everyone wants to join.

So what to do about it? I believe we are already making some progress but it’s important to examine a problem, and then take action. I’ve asked several people to give their insights this week, and maybe as the week comes to a close we’ll have a clearer picture of what we should do as a group and individually to be more inclusive. This a big, difficult topic, so I ask for your understanding and patience as we begin the conversation this week. Mutual respect and understanding are vital to the topic, but also to the conversation. We may not always get it right, but it’s a start.